It’s party time! In our family, spring and summer = Birthday Season. All six of us have birthdays in the months between April and August. The most recent birthday celebration belonged to my middle daughter. Guess how old she turned….. My youngest child has the last birthday – hers isn’t until August. She’s currently …. She can’t wait to have her birthday. Not only does she have big plans for a party, but she doesn’t like to be so much “littler” than her sister!

When you looked at those fingers, did you count them? I bet not. You glanced at the quantity and you knew it said five for Mary and three for Clara. That’s called subitizing – seeing a quantity at a glance, without counting. As you can tell, it’s a skill that even very young children can acquire. In fact, there are fascinating research studies that show even babies can subitize in small quantities. Subitizing seems to come more naturally to some children than to others, but it can be taught to all children, and it’s worth investing your time to teach it to your children because it is a foundational math skill and a key component of good number sense.

And that takes us to the very first RightStart game that you can play with the younger child: Finger Cards in Order, game N2 in the Math Card Games book. It seems like a pretty simple game, however it’s excellent for children who are developing subitizing skills and understanding the relationship between the whole and the parts. Both of my little girls are working on this one now. And make sure your older children have this skill too!

To play the game, all you need is a set of finger cards. You can find these in the back of the RS2 RightStart Math Level A Lessons book; or you can download – just click on the picture below. If you want them to last a little longer, print on cardstock then laminate. I laminated our set when my oldest was three and it’s still going strong. 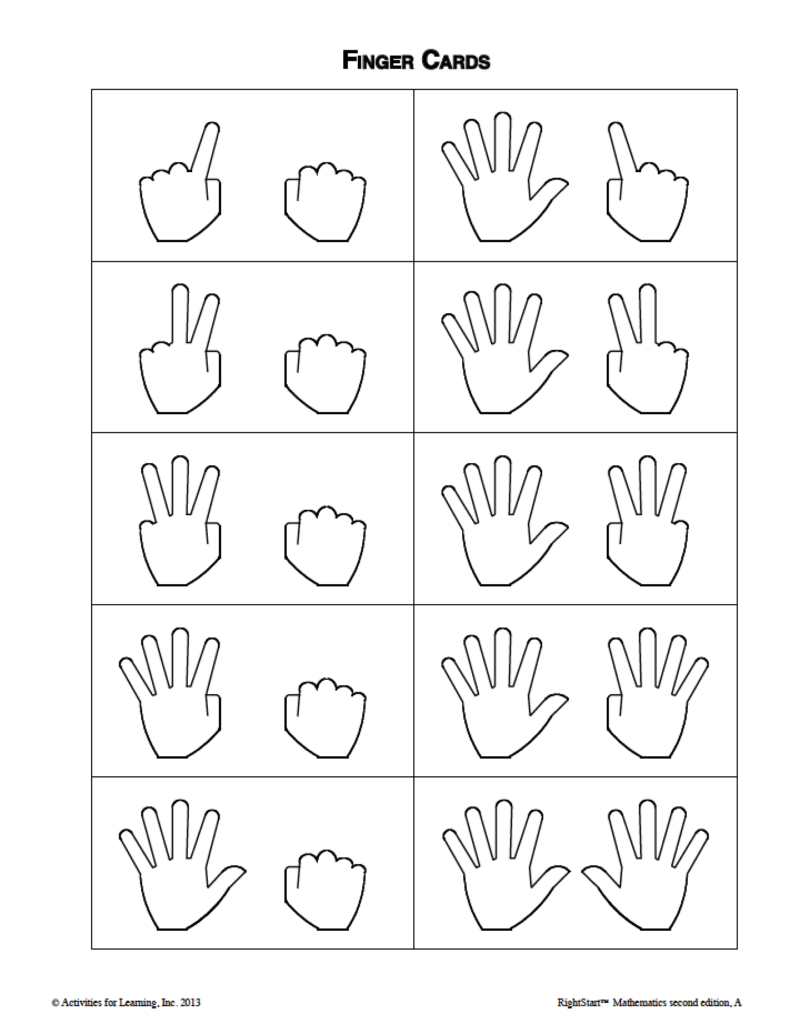 Print the cards, cut them apart, and lay them down in a random collection. Ask your child, “Which card shows one?” She will generally choose the card with one finger pointing up. Have her move it to the side. Next ask her, “Which card shows two?” Tell her to put that card next to the first card. Keep going until she has all ten lined up! For some children, the finger cards after five are difficult. For adults, it’s easy to see that five and two is seven, but this is not innate for children – it’s something they have to learn.

When you first start playing this game, if your child is not familiar with what six to ten look like, show the quantity on your hand, allowing your child mirror you and the quantity on their hands. That will help them begin see the quantity at a glance. Discourage them from counting the fingers one by one. What fun variation can you dream of? Share your ideas below! See you next week…..

My daughter is 7 and this is our 2nd year to use RightStart Math. She is in 2nd grade and is adding and subtracting 4 digits numbers with trading like it is nothing. She also can do her multiplications. The most amazing thing is that when she is somewhere and has to spend her money she is quick to tell them how much change she needs back. I have seen a lot of teenagers and adults who cannot do thi… END_OF_DOCUMENT_TOKEN_TO_BE_REPLACED

My daughter is in 4th grade this year. Math has always been a struggle for her, as it was for her father. I discovered that she has dyslexia (which is hereditary). I didn’t realize that had any effect on math, but I found out that people with dyslexia cannot learn with rote memorization or sequential skills. This makes it harder for them to remember math facts or how to do algorithms. Before I kne… END_OF_DOCUMENT_TOKEN_TO_BE_REPLACED