One of the many aspects that drew me to RightStart™ Math was the idea of my children learning how to do mental math. Growing up, the whole idea of mental math was fascinating to me, but it was not encouraged. And, to be honest, I really doubted my own children’s ability to actually calculate equations in their minds. But they can! All four of them!

That being said, a couple of my kids needed a little extra practice. That’s when I found the Mental Addition game in the Math Card Games book, game A57. If you are finding your children struggling with mental addition, this is a fabulous game to give them a bit more practice in a fun setting.

To begin, start two rows. Each row will have one Multiplication card and one Basic Number card. The first player will use their mental math skills to add the two cards in each row. Remember, if the child is struggling, use the abacus as this will build a mental model of addition.

If the player has a card that matches either the ones place or the tens place in either or both rows, she can lay it down in the row. For example, the first addition equation is 32 + 9 = 41. If the player has either a 4-card or a 1-card, the card can be played. 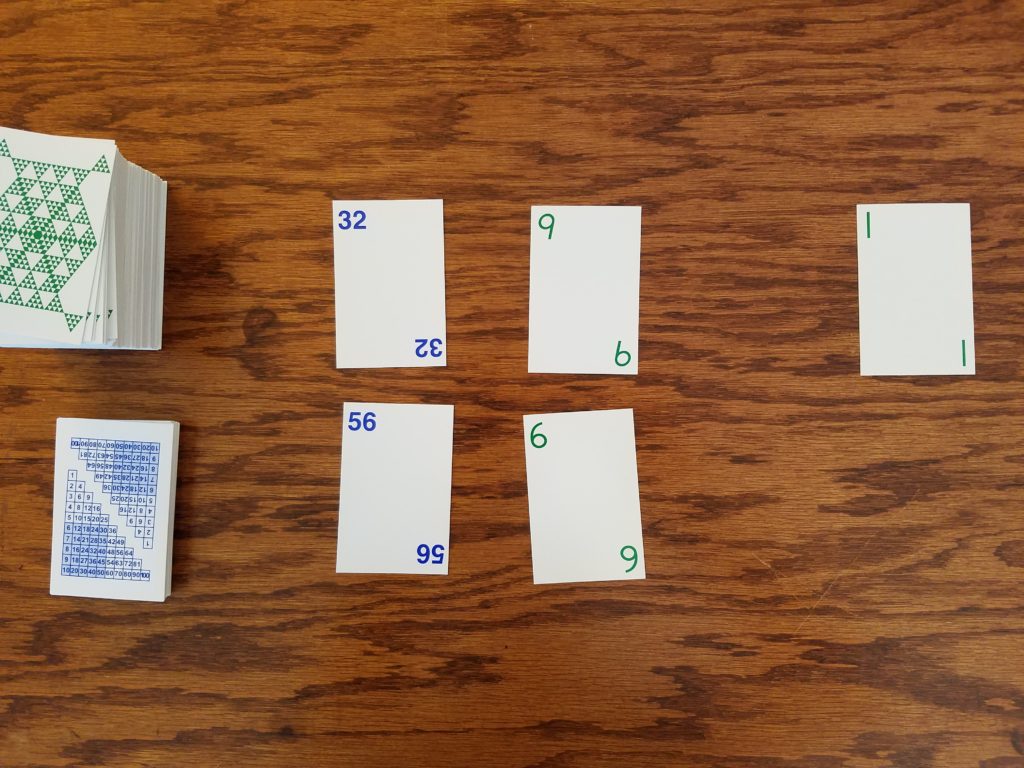 Once the first player has either played her cards, it is the next player’s turn.

If the player cannot play in either row, he can start a new row with a Multiplication card and a Basic Number card from the stock. There must always be at least two rows available to play on. The player who completes a row collects the cards from that row. When the Multiplication deck has been exhausted, the game is over. The winner is the one who has collected the most cards. Over the years, I have spoken to many parents via email or at conventions who feels their children need some extra time and work to be able to do mental math. I almost always recommend this math card game for them to play. It is really fun and it helps the student in their mental math skills.

My daughter is 7 and this is our 2nd year to use RightStart Math. She is in 2nd grade and is adding and subtracting 4 digits numbers with trading like it is nothing. She also can do her multiplications. The most amazing thing is that when she is somewhere and has to spend her money she is quick to tell them how much change she needs back. I have seen a lot of teenagers and adults who cannot do thi… END_OF_DOCUMENT_TOKEN_TO_BE_REPLACED

My daughter is in 4th grade this year. Math has always been a struggle for her, as it was for her father. I discovered that she has dyslexia (which is hereditary). I didn’t realize that had any effect on math, but I found out that people with dyslexia cannot learn with rote memorization or sequential skills. This makes it harder for them to remember math facts or how to do algorithms. Before I kne… END_OF_DOCUMENT_TOKEN_TO_BE_REPLACED