Summer is such a fun and relaxing time. People are taking vacations, visiting family, enjoying more outside activities, and probably staying up a bit later since the sun is out longer. However, as nice as summer is, at some point “it” hits.

This “it” … is looking forward to school starting back up. Lesson planning. Scheduling. A fresh start. A clean slate. And secretly, I think I am also a bit ready to get back to a schedule.

So the countdown to school starting begins. At least it’s starting to begin around here.

It’s fitting that this week’s game is Zero Corners, game S9 in the Math Card Games book. It’s played almost like Corners game, using the Corners™ cards, a set of 50 cards with four numbers on them, each in a different color.

In this game, rather than add your points to your total score, you will be subtracting your points.

FYI… before playing a subtraction game, you want to make sure your child thoroughly knows their addition facts. Less confusion results if addition is mastered before attempting subtraction. (This bit of advice comes straight out of the subtraction chapter in the Math Card Games book.)

The beginning score is dependent on how many people are playing this game:

What is the goal of this game? To be the first person to reach zero. Exactly zero! If you go negative, you can’t win. Gotta be careful. A player may skip their turn if doing so would make his score negative. Remember that scoring is done mentally and you only write down the actual score.

So lets look at a game being played. Two people are playing: Nicholas and Chris. Starting score is 300. 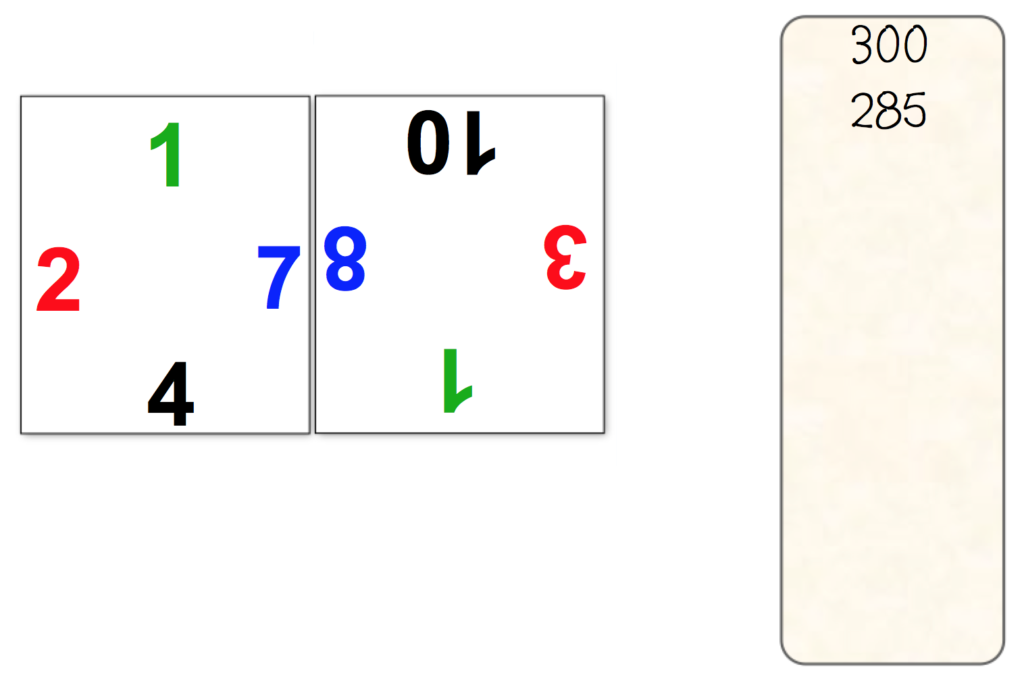 Chris matches two numbers to equal 10. He does the mental subtraction and writes his score as 290. And the count down to zero is underway! Happy playing!

My daughter is 7 and this is our 2nd year to use RightStart Math. She is in 2nd grade and is adding and subtracting 4 digits numbers with trading like it is nothing. She also can do her multiplications. The most amazing thing is that when she is somewhere and has to spend her money she is quick to tell them how much change she needs back. I have seen a lot of teenagers and adults who cannot do thi… END_OF_DOCUMENT_TOKEN_TO_BE_REPLACED

My daughter is in 4th grade this year. Math has always been a struggle for her, as it was for her father. I discovered that she has dyslexia (which is hereditary). I didn’t realize that had any effect on math, but I found out that people with dyslexia cannot learn with rote memorization or sequential skills. This makes it harder for them to remember math facts or how to do algorithms. Before I kne… END_OF_DOCUMENT_TOKEN_TO_BE_REPLACED